Oh Canada- We Love Your Wool and Your Rodents. 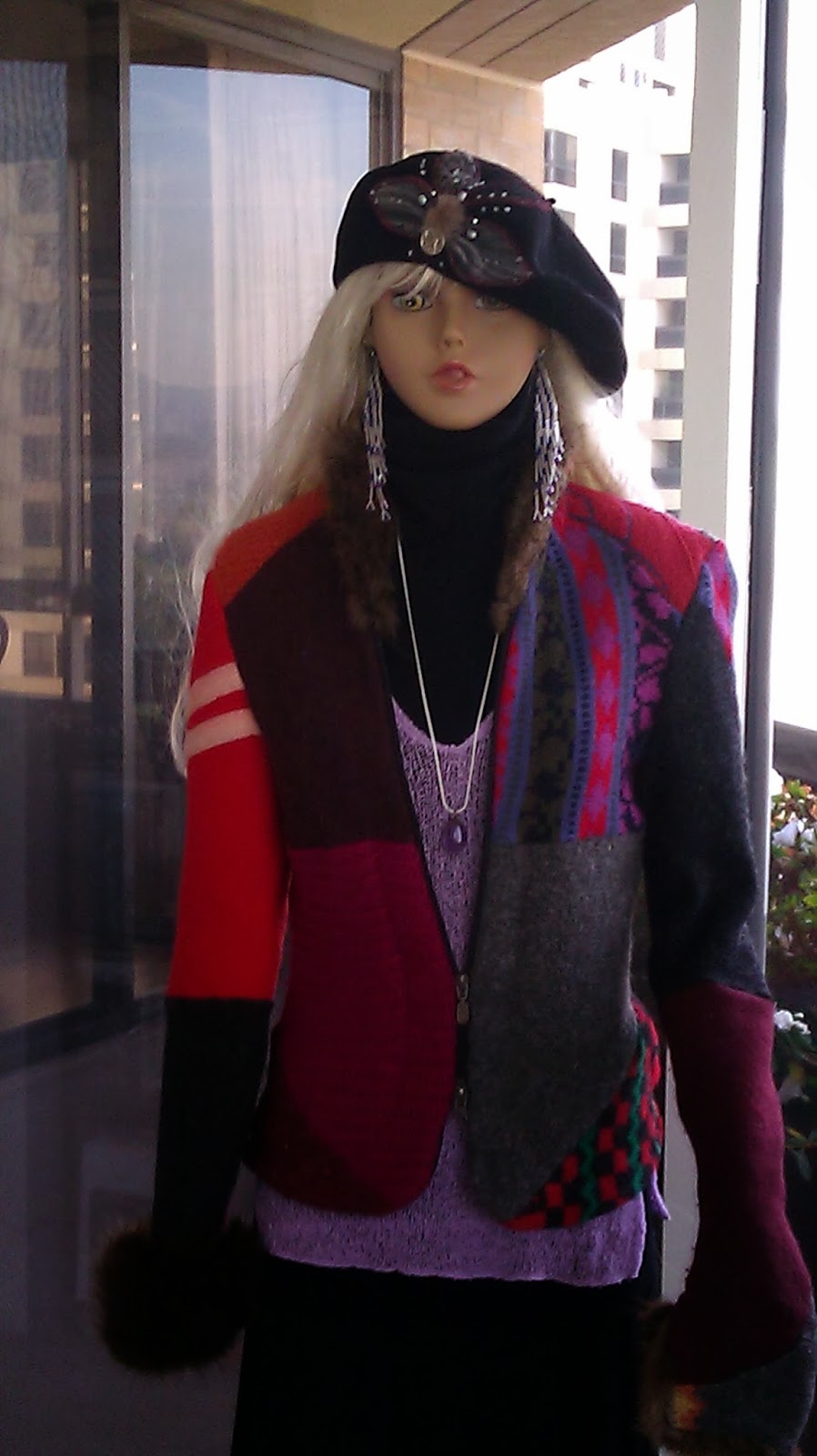 One of my favorite places in North America is the Quebec Providence of Canada. It is quiet, appearing to be set apart from the world, but ever so sophisticated. Both cities of Quebec and Montreal have a fairytale eloquence that almost transcends time; especially Quebec. It is north of my homeland of Maine. As a child it was my first trip outside the USA. In those days we traveled by car, navigating the rough and rural roads of Maine that led to the boarder and across to Quebec.  Then we had several hours more to drive more through the rural and rough roads of Quebec Providence to get to Quebec City.
I was young, so I remembered very little about the trip. But I did know they have the most beautiful Ice Festival and a delicious maple syrup season, as well as delicious local fresh food, warm furs and very stylish and unique designers.  There is a sophisticated style in Quebec (after all they are French).
My husband and I decide to take a trip to Quebec the week before Christmas. We had traveled to New York for a visit so decide to then take a plane and hop up to Quebec City. As we flew across the border and closer to the City, the plane flew rather low so that we could see the sites. There were none accept a dense forest covered with snow. It was barren of human life. This was the wilderness and it was beautiful.
Arriving in Quebec City we stepped into the coldest weather I have ever experienced. (Remember I’m from Maine, so I can deal with cold). But really this was colder than a witch’s you know what! We had long underwear, wool sweaters and wool coats, but still the cold bit through to the bone.
We went to our hotel which was a lovely boutique hotel with lots of art. The Floor in the bathroom of our hotel was heated and the bed had lots of down comforters to keep us warm.  Cozy and sophisticated we settled in and began to plan our jaunt around Quebec City.
After unpacking we headed out into the streets to see the City. Along the way (actually, every other shop) were fur stores. We began to stop into each store, not to buy a fur, but to get warm. It was so bitter cold you could only walk outside for a short time.  So, in each store I tried on furs while my husband sat and warmed his hands, feet and entire body.
You may not like the wearing of furs, but I do need to tell you, if you lived in an environment like Quebec you might change your mind. Just a side note – in Montreal I attend a Yoga therapist conference. One of the girls I met was from Quebec. She wore a really cute fur vest. I commented on her vest and she thanked me. We had lunch together and she mentioned she was a vegetarian. So I asked, “If you are a vegetarian, how can you wear a fur?” She explained that it was so cold in Quebec that everybody wears furs. She bought the fur to keep warm, but not the animal to eat. Because I had been to Quebec, I totally got what she was saying.
Now back to Quebec and my shopping trip. It is here in Quebec that I first heard the name F-La Mode. https://www.facebook.com/Andla123
According to the boutique owners in Quebec, it means, to heck with fashion it’s all about style.    I wandered into one of the small boutique where I found the designer, seamstress and sales person all working together. They were making the sweater you see on Francine. It is a handmade original sweater with a muskrat collar and cuffs. “A muskrat”, you ask?!  Yes, I asked the same thing. Seems they are used for a lot of cheaper furs in Quebec. A muskrat is a rodent.  It is a semi aquatic species native to North America.  And it is a resource of food and fur for humans. Yes, people do eat roasted muskrat! I haven’t tried it, but they say it is good.
So, I bought the sweater. Each time I put it on I think about the fact that I am wearing a rat around my neck and on my cuffs. It is warm, not as soft as mink, but I get why it’s widely used throughout Quebec. It’s warm and it’s cheap, and you can roast the little rodents!
The hat I bought in Montreal. It has a tiny piece of beaver fur which is also widely used in Quebec for warmth and happens to be a rodent just like the muskrat. I have eaten beaver stew, but that’s another story.  I love berets, but always feel a little overly French in one; however when I wear it someone always tells me they like it. Montreal also had some beautiful furs, as well as, sweaters, hats and stylish cold weather clothes.  Quebec Providence is a land of survival and style mixed into a look that is so warm, it makes you want to live there .But I’m from Southern California where these clothes can look a little over the top. Wait…I’m from La La Land where girls wear Uggs with shorts and anything goes. So what do I care…, I’m wearing my rodents and I’m staying warm!
Support an artist even if they use rodents and wool. It’s good for your soul.
Doctor Lynn
https://www.facebook.com/Andla123
http://f-lamode123.blogspot.com/


http://www.facebook.com/DrLynnAnderson
Posted by Doctor Lynn Anderson at 5:59 AM

Doctor Lynn Anderson
A river symbolizes the flow of time. Everything in nature has its own cycle of transitions, transformations and passageways. It is also symbolic of the many twist and turns we must encounter in life. Like the river we must take time to turn, to pause, alter our course and refresh ourselves. The river also reminds us that we can only go forward. As the saying goes, “You can never step into the same river twice.” Once the river has completed its journey it flows onto the delta which means change. Here the river loses its individuality and becomes part of one great sea. This is when we all re-become the great consciousness of the universe. How we make the journey is more important than the journey Improving and maintaining your health is Pro-Active Anti-Aging! It’s more than a good diet and exercise. Attitude, awareness and acceptance let us navigate the many twists and turns of life with strength, balance, flexibility and peace of mind. Follow Doctor Lynn’s Pro-Active Anti-Aging Tips and make your life a river of flowing consciousness where each new change is met with the best of you!